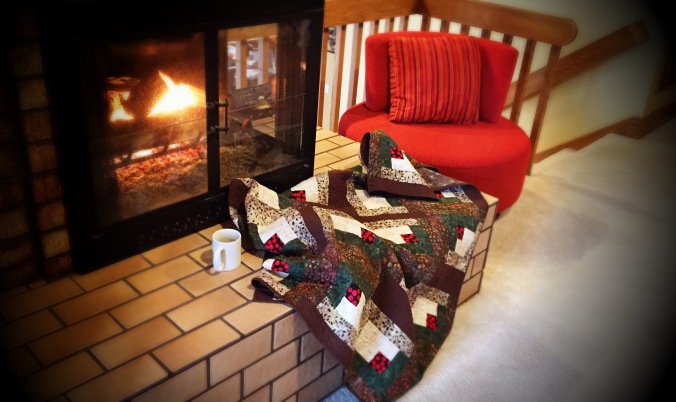 I will admit that I am a knowledge geek. If someone poses a question about something and we don’t know the answer, I am the first to whip my phone out like a gun at the O.K. Corral to look it up. In fact, just in writing this first paragraph I have fallen into the trap of looking up the O.K. Corral phrase, which I had never given any thought to before when using it verbally. In case you’re wondering, wikipedia starts out with this: “The Gunfight at the O.K. Corral was a 30-second gunfight between the semi-outlaw group the Cowboys, and lawmen, that is generally regarded as the most famous shootout in the history of the American Wild West. The gunfight took place at about 3:00 p.m. on Wednesday, October 26, 1881, in Tombstone, Arizona Territory.”

I was looking at a quilt I made for an exhibition I took part in, for an MQX show many years back. It’s a Log Cabin quilt. I realized that all I knew about the block was that I’d always heard the center was red to symbolize the fire in the hearth of the cabin. So, I looked it up and found a nice article on Womenfolk.com that talks about the Log Cabin design. Turns out, they might have a much longer history than pioneer days even!

In the early part of the 19th century the British found thousands of small animal mummies when they began to  pillage the tombs in Egypt. The linens wrapping the small animals were wrapped in had the log cabin design on them. Sadly, a huge number of these mummies were sent back to England where they were distributed to farmers to use as fertilizer. (When you wonder why we are now slaves to our cats, I think information sheds *cough* some light on the situation. Pun fully intended.) The article points out that perhaps this is how the log cabin design initially came to be in our collective knowledge for quilts.

There are a couple other theories too, but I really want to just believe and go with the cat version. But then, I am a crazy cat lady.

One thought on “The Log Cabin Block: Mummy’s the Word?”